Epic launched Fortnite Battle Royale in September 2017 as a free game, since then, the popularity of the game has shown an explosive growth trend. This also puts Fortnite developers under extreme pressure to work a lot of time to maintain the success and profitability of Fortnite, which leads the company to a toxic and stressful environment. 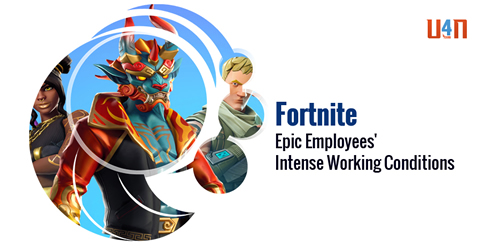 According to recent reports, Fortnite: Battle Royale's developers are regularly worked over 70 hours a week and some even reach 100 hours. Though the company gives them unlimited time off, it's almost impossible to take time. They said if one of them take time off, the workload falls on other people, and no one wants to be that guy.

One employee said the biggest problem is that they have been patching. Fortnite's executives are focused on making the game popular for as long as possible, especially in all new competitions that are coming in.

This story shocked the Fortnite community and caused a heated discussion for the players:

"Epic's problem is communication and releasing too many changes. Half of the problems are caused by, as stated, new content that has been rushed and not tested. That more work for everyone in terms of fixing and balancing. What they have to do is calm down with all the content, fix the game and then proceed to release new content in a timely, controlled and tested manner."

"I appreciate the epic employees for all they're doing but management at epic is going the wrong direction imo and a lot of the work is going to waste."

"They should focus on releasing content between seasons only. During the season, the only “content” should be LTM changes, balance changes, bug fixes and new cosmetics. All these weekly updates are not only terrible for workers but the players too since they have to adapt to it constantly. Stop bringing in new weapons and vehicles that change the game so much. Regular updates also mean more bugs, since there is less time to test every patch (QC) properly. Look at the mobile version for example which is completely filled with bugs."

There are also players who express their sympathy for Epic employees. One player said that he almost wants to take back anything he has ever said, and now he wouldn't even mind having an update like every 2-3 weeks. So, what about your thought? Let us know in the comments section below. Also, click here to get some in-game items directly is a way we can help you reduce stress in the game.

Most Users Ever Online: 167

Today: None
Upcoming: None
© Simple:Press